I found a bizarre, fat, yellow character on the website of Sanrio, the Japanese cartoon goods company. What was this weird, tubby creature? Incomprehension came over me.

Turns out, this is a 2014 Sanrio character, Gudetama (pronounced good-eh tah-mah). His name loosely translates as “lazy egg.” He’s an egg yolk with a bacon blanket. 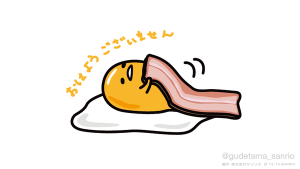 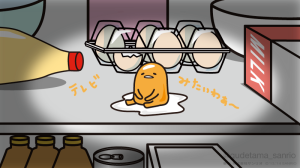 An anthropomorphic dancing pear, snow-capped mountain or tofu block might seem like lightweight fun, but mascots are a seriously lucrative industry. Popular mascots are celebrities that generate millions in publicity and merchandise sales. Advertising giant Dentsu researched the top products in Japan for 2014 and mascots were number two, ahead of smartphones, hybrid cars and premium beer. Disney’s movie “Frozen” was number one.

With his simple lines and roly-poly shape, Gudetama has a hallmark kawaii (cute) yuru-kyara appearance. But he is not a typical cheery, perky, hard-working public relations spruiker. He is apathetic, unmotivated and sullen—a dour iconoclast. He complains on his Twitter page that he hates tweeting but the higher-ups expect him to. It doesn’t matter as he’s “going to be eaten in the end anyway.” 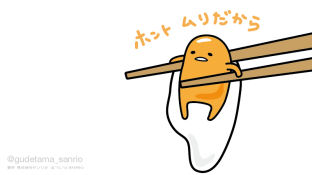 It’s so easy to travel in Japan. The extraordinary customer service overcomes any language barrier. The cities are wonderfully hi-tech. Public transport is clean and punctual. The crime rate is low. However, Japan has one of the world’s highest suicide rates. My three-week holiday felt like one smooth, seamless Shinkansen bullet train ride. The Shinkansen is an eerily quiet experience, akin to gliding in a hermetically sealed pod, buffered from the outside world. As a tourist, I was also shielded from the harsh realities of daily Japanese life.

For the Japanese, school is extremely competitive and juku (after school tutoring) is common. The name of their university is often the most important factor in scoring a job. Long work hours and after-work team socialising are standard. A recent Expedia study found workers on average take about seven of their 18 average annual vacation days and these are often used for sick days. Around 17% don’t take any vacation. Karoshi is the Japanese word for “death from overwork.”

The demands of company and community often trump that of family and individual. Harmony and conformity in these crowded societies is upheld by strict hierarchical structures and protocols. So when an endearing, world-weary embryo emerges, perhaps it’s no surprise the Japanese quickly took him to heart.

Gudetama hatched in March 2014 and shot to rank seven out of 100 in Sanrio’s annual character popularity poll. His product range from stationary to home wares has exploded and he has a one-minute animation broadcast every weekday morning on national TV.

He is a breakout success in a country yearning for an anti-hero. The Japanese can contend with high expectations throughout their lives. An innocuous cartoon of a disillusioned wobbly egg represents the human psyche’s soft underbelly. Behind the stoic facade of every diligent student and dedicated salary worker is someone with emotions as authentic as in any other nationality.

Japan’s mascot universe keeps growing. In 2010, the first nationwide Yuru-kyara Grand Prix popularity contest drew around 170 participants. In 2014, it had almost 1700. Not everyone is impressed. In 2014, the Finance Ministry ordered all local authorities to cut back on their cuddly critters, citing them a waste of taxpayers’ money. Under the protective commercial umbrella of Sanrio, Gudetama will survive.

As a traveller, Japan is my favourite destination, but if I had a Japanese doppelgänger would she have thrived or crumpled in the pressure-cooker? I can enjoy Gudetama’s charms from a comfortable distance through the internet. In today’s social media world, where the biggest stars are Instagram models in bikinis spouting quotes like “BELIEVE” and “Live Your Dreams,” I choose the lazy egg.

Gudetama already has over 200K Twitter followers. Those models should keep checking over their svelte, sun-kissed shoulders. One day their status might be eclipsed by a gorgeously nihilistic flabby blob.

Life is hard. Stay in your shell: 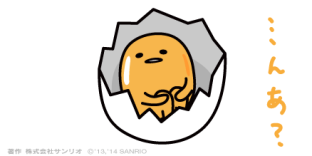 Gudetama can morph into different dishes: 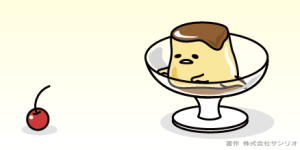 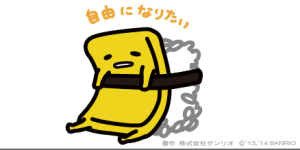 Like many exhausted Japanese, Gudetama enjoys a short break in an onsen (hot spring bath): 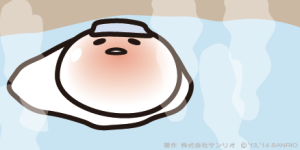 Gambari is encouraged in all Japanese people from kindergarten through adulthood. It means “fight, persevere, do your best”. Gudetama tries gambari. Lying down: 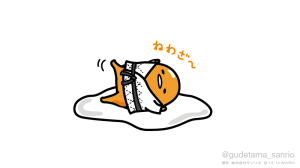 Until it all gets too much: 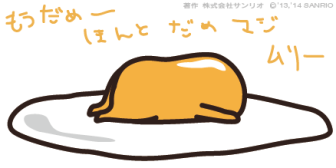 Related: Why is the World Obsessed With Hello Kitty?